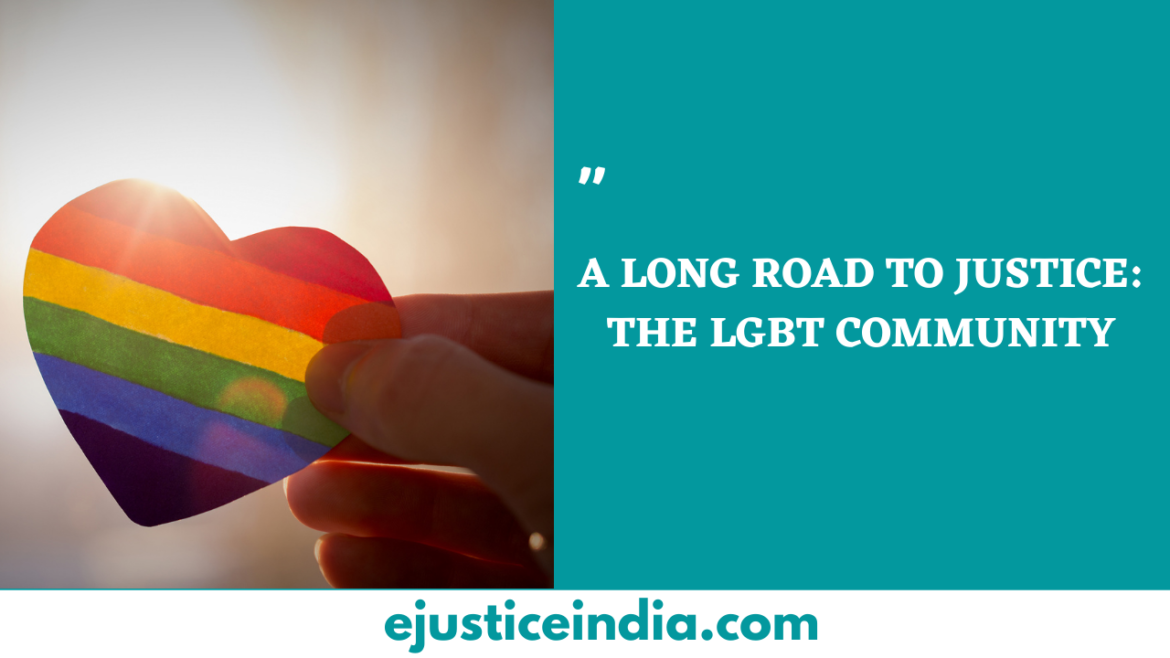 The idea of human rights sets the path equal for all humans irrespective of their rights, religion, caste, creed, sex etc.  It follows the principle of our constitution which enlightens the saying that “All Humans should be treated equally” and anything that obstructs the dignity is a violation, for it threatens the principle of equality and creates the wall of discrimination.

At one side where Article 14 & 21 of our Constitution says that the state should not take away the rights of the people of our nation, on the other side another sex (apart from men and women) is fighting for the rights they never got from the constitution. Yes, the LGBT Community, which means lesbian, Gay, Bisexual, Transgender and other intersect people who are gradually coming into the shade of justice and have fought a long battle for their rights.

India is a land of religion and cultures which makes it unique in itself and with this vastness the attitude towards this subject of LGBT varies vastly among individuals. The world has always given priority to only two categories i.e. men & women but today India’s LGBT citizens are not just an “infinitesimal minority”. They have a strong voice that refuses to be silent any longer and are making efforts to reclaim equality so that the world gives three priorities rather than just two.  Fighting for the justice was not easy as this battle started a long time ago in 1977 when Shakuntala Devi[1] published the first study on “Homosexuality” in India through her book – The World of Homosexuals. Yes, apart from knowing as a Human Computer, she was also a powerful writer which was not known by many. She was married to a homosexual man and this drag her interest towards the term “Homosexuality” and motivated her to study on this topic which further made her publish a book which went unnoticed at that time.

Issues of LGBT Communities in India

Under Section 377 of Indian Penal Code 1860, the purview of unnatural offences is equivocal on the grounds that there is no clear differentiation between consenting and coercive sex, against the order of nature. In our Indian Constitution, Article 15 states that there should not be any discrimination of Indians of the basis of “SEX”. Before getting the tagline of Homosexuals/transgender, they are categorised as Indians first and should be protected under this fundamental right provided by our Constitution. Regardless of this, they are surrounded by discrimination and loneliness across the world in all spears of life. Abuse targeting occurs on a daily basis in their life. In most of the state/country, same sex couples do not get equal respect, protection and place in the society as opposite sex people gets and consequently suffers a disadvantage in access to social protection scheme. This individual (LGBT) many a times hide their sexual orientation in the labour market due to out of fear of losing their jobs. They face discrimination in the workplace and suffer socio-economic inequalities. This drags the victims to get in the trap of crime and violence and becomes further brutal when the crime gets the form of murder. The huge bundle of discrimination and exclusion from the peer groups, societies, families and communities left a major impact on their lives which further took the form of:

LGBT Community also consist people like us but what makes them different is their gender but apart from all these they are Humans first and they are bound to be treated equally and that’s what the rights of Humans talk – No matter what gender they are!

Legal Status of Homosexuals in India

Section 377 of the Indian Penal Code 1860 relates to unnatural offences and includes homosexuality within its domain. India adopted this law of homosexuality from the British Penal Code dating to 19th century.

“Whoever voluntarily has carnal intercourse against the order of nature with any man, woman or animal shall be punished with imprisonment for life, or with imprisonment of either description for a term which may extend to ten years and shall also be liable to fine.”

The Naz Foundation (2009) judgement is a landmark case in the Indian Judiciary which created history for its remarkable work against Section 377 of the Indian Penal Code. This case raised the question for abolishing section 377 in front of the bench and the court in this matter brought two angles;

The bench of Delhi High Court passed the judgement of this landmark case by declaring Section 377 as an unconstitutional infringement of fundamental rights,

In 2013 Suresh Kumar Koushal v. NAZ Foundation made India lost its pronounced step which was achieved in 2009. In this judgement two contentions were brought down;

After this judgment the individuals who were unreservedly communicating their gender freely in view of the judgment given in 2009, they were considered as lawbreakers and was targeted in the eyes of law as Supreme Court concluded that Section 377 is not unconstitutional and does not violates any rights contained in our Constitution.

Later in 2014 another judgement got passed in the case of NALSA v Union of India where it was enlightened that the Indian Laws only focuses on binary genders i.e. male and female and transgender rights are not secured by any provision due to which the transgender community was confronting segregation. The Supreme Court shredded light on Article 14 of our Constitution which protects every person’s rights and includes even the transgender. Under Article 15 & 16 gender based discrimination is prohibited and if the discrimination happens on the basis of sex then it is a straight violation of the Articles. A significant contention was made by the Supreme Court in Article 19 where it said that privacy, gender identity and uprightness are completely ensured under Article 19 (1) (a) which indirectly included Section 377. Further Article 21 which states Right to live with dignity incorporates the right to choose gender identity.

In clarifying the decision the bench said: “while reading down section 377, the High Court noticed that diminutive division of the nation’s population comprises LGBT individuals”. This case paved the road for gender identity and gave it a legal recognition.  This judgement stated three points;

A 9 bench sitting in K.S. Puttaswamy v Union of India made another judgement (authored by Justice Chandrachud) where it stated that Supreme Court holds the obligation to rectify the mistake done on account of Suresh Kumar Koushal v NAZ Foundation and made it clear by giving sexual orientation an essential attribute of privacy and laid its protection in every platform.

Finally in Navtej Singh Johar v Association of India declared Section 377 as partially unconstitutional by a five bench judge. The Supreme Court declared Section 377 as unconstitutional as it is a violation of Articles 14, 15, 19 & 21 of our Constitution and overruled the judgement given in Suresh Koushal and Ors. v NAZ Foundation and Ors. The Court futher enlightened that non- consensual sexual acts committed against adults and minors will be governed by Section 377.

The battle which started a long time ago finally ends because of the judgement passed in Navtej Singh Johar v Associations of India which changed the life of many individuals in the country.

A law which was set in the 19th century by the British Empire in 1861 got decriminalized in 2018 after fighting many cases in the High Court and Supreme Court of India for the rights and equality of the transgender and finally the LGBT Community got the right to express their identity freely without any obstruction. This community holds a different flag as a symbol of their identity known as the “Rainbow Flag”. India has nearly 2.5 million gay population and this individuals are also a part of our society. It’s not their sexual orientation rather the people’s mindset made them to think that LGBT individuals are not a part of their society. This people don’t become a part of this community by choice. If normal men and women have the right to live a respectful life in the society the why not a person from LGBT community can get this respect? We all are humans and we should not be judging someone by their religion and gender. If we talk about human rights then it entitle itself to humans rather than genders.