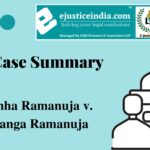 Author: Khushboo Chopra CITATION  AIR 1961 SC 1720 BENCH SUBBARAO, K. INTRODUCTION The case questioned the maintainability of the suit filed by Aradanaikar and trustee of the temple for the declaration of the right to first Theertham. FACTS In Tirunelveli district there is a temple at Alwar Tirunelveli called Athinathalwar temple. The deity presiding in
Read More 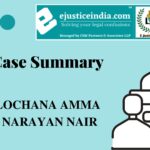 Author: Khushboo Chopra CITATION 1994 SCC (2) 14 BENCH  JUSTICE K. RAMASWAMY INTRODUCTION The case deals with the explanation VIII of the section 11 of civil procedure code which states that an issue heard and finally decided by the court of limited jurisdiction , competent to decide such issue , shall operates as res judicata
Read More 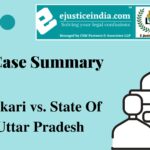 Author: Mayank Raj Case – Bhikari vs. State Of Uttar Pradesh. Citation – 1966 AIR, 1 1965 SCR (3) 194. Bench – J.R.Mudholkar, K.N.Wanchoo, S.M.Sikri. Introduction – The appealing party who murdered a youngster in a merciless way and harmed others was attempted and sentenced under section 302 IPC and his intrigue under the steady
Read More 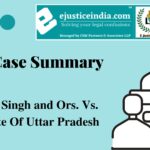 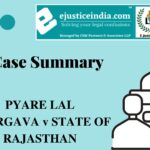 Author: Pranjali Pandya EQUIVALENT CITATION AIR 1963 SC 1094 BENCH JUSTICE K. SUBBARAO RELEVANT PROVISION INVOLVED SECTION 378 AND SECTION 379 OF THE INDIAN PENAL CODE, 1860. INTRODUCTION Theft refers to taking away property of any individual without their consent; the same is a penal offence under Section 378 of the Code and punishment lies
Read More 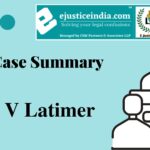 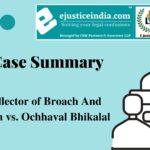 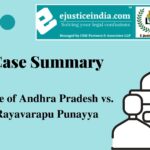 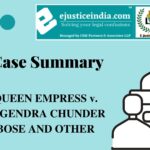 AUTHOR: PRANJALI PANDYA CASE NAME: QUEEN EMPRESS v. JOGENDRA CHUNDER BOSE AND OTHER EQUIVALENT CITATION: ILR (1892) 19 Cal 35. BENCH: JUSTICE W.COMER PETHERAM,Kt. INTRODUCTION Before the enactment of the Indian Constitution, Section 124 – A of the Penal Code was used to end any kind of political debate. Under the Sedition provision, the British
Read More 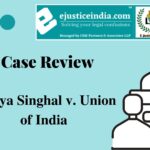 Author: Tanushree Bhattacharya  The fundamental right of freedom to speech and expression is considered as one of the most sacred rights and also a salient feature of any democracy. Although it is natural that this right is not absolute in the sense that it provides protection against any kind of hate or indecency being spread.
Read More