Author: Esha Yadav Introduction Justice delayed is justice denied it is a legal maxim which means that if justice is not carried out right away timely ,then even if it is carried out afterwards then also  it would not consider to be a fair justice.  When a   common man goes to court in order to
Read More

Author: Bhavya Jain GENERAL INRODUCTION Marriage has been considered as the greatest and the most important of all the social institutions. For the Hindus, it is considered as a means to lay the foundation for building up the family which is the basic unit of any society. Since marriage holds such a great significance in
Read More 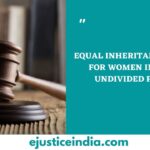 Author: Manju Chauhan ABSTRACT A Joint Hindu Family is fundamental aspect of Hindu Law which concept of joint family is where there common ancestor and his male descendent along with their family member lives together from a long period of time. This article discusses the provisions of Joint Hindu Family, role of Karta, succession and
Read More 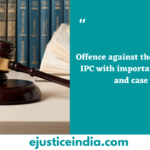 Author: Sneha Saha Introduction Offences are been committed since the early period which is dedicated against the state and in correspondence to this, there have been laws that have been sanctioned to defend and safeguard the State. And the crime which we are talking about is the waging war, sedition, rebellion and many more. The
Read More 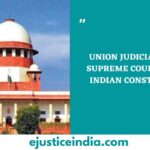 Author: Raunak Raj Tiwari INTRODUCTION The Supreme Court of our country is treated as the guardian of the constitution. The Constitution is the supreme law of the land. Our constitution is the lengthiest written constitution of the world and therefore it is not free from ambiguities and its meaning is likely to be interpreted differently
Read More

Author: Siddharth Swain The Times of India reported that the Supreme Court of India vide order dated 08.07.2021 immediately granted interim bail to 13 prisoners of Agra Central Jail who have been festering there for about 15 to 20 years after observing that they were juveniles when the offence was committed. However, they were not
Read More

By Monalisa Maity Overview Uttar Pradesh released a new policy named- U.P’s new population policy. Target of this policy is to bring down the gross fertility rate from 2.7-2.1 by 2026. For this purpose the U.P State Law Commission has prepared a proposed draft bill – Uttar Pradesh Population (Control, Stabilization and Welfare)Bill, 2021. INCENTIVES
Read More

Author: Shivanjali Mane ABSTRACT This paper makes an attempt to delineate numerous aspects of Section 138 of the Negotiable Instruments Act. Section 138 is that the principal section coping with dishonour of cheques. It delves into the history of its institution, with the explanation for its necessary enactment and moves to clarify the procedures and
Read More