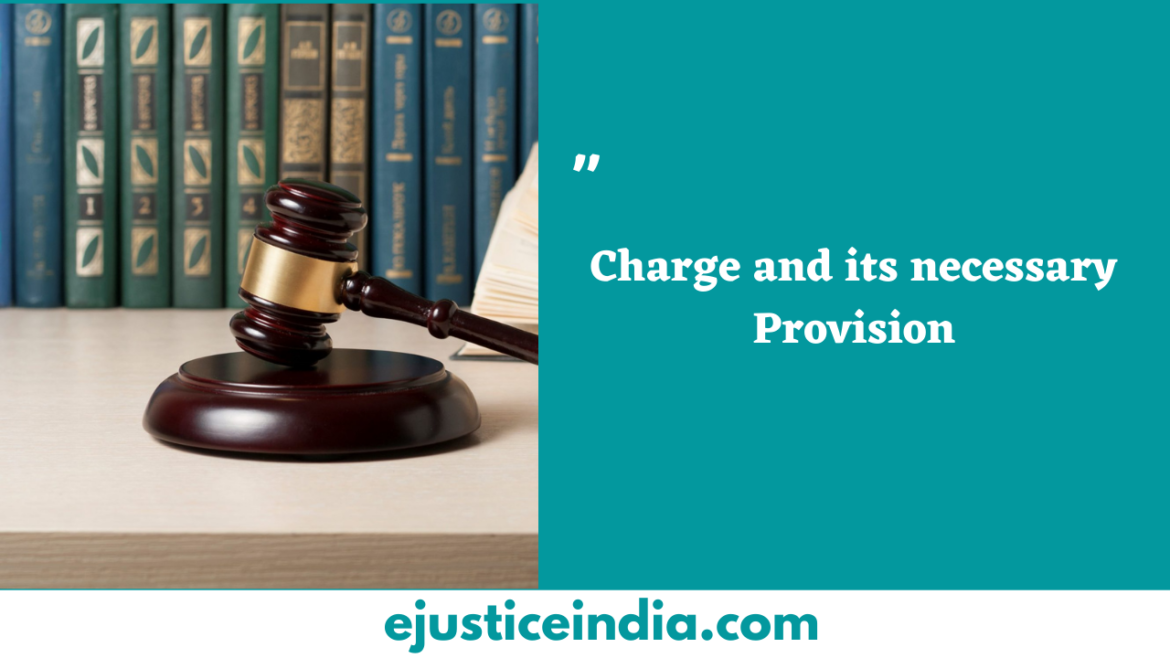 In a criminal trial the charge can be considered as the foundation of the accusation. The Term Charge has been defined in the Section 2 (b) of the Criminal Procedure Code, 1973 that, ‘charge’ includes any head of charge when the charge contains more heads than one. The purpose of charge to serve intimation or notice to the accused, made up according to appropriate language of law; it should be precise, unambiguous and  clear  notice about the accusation for the accused is being called upon for the course of trial. The purpose of intimation to the accused is the principle of criminal law and also the right of the accused to receive such information about the charge which was made against him.

The following are the essentials of charge:

In Union of India v. Prafulla Kumar gives guidelines after observing a lot of cases the following points has been made-

(1) Section 227of the Criminal Procedure Code weighs the evidence for concluding whether case has prima facie or not;

(2) When the accused give the full facts, relevant facts and Evidence against his accusation, the court may frame charge and proceeds the trial.

(3) When the accused proved his innocence with enough evidence and the evidence satisfies Judge, which was produced by accused and finds out there is no grave suspicion, then judge will consider the entire facts of the case, by that time Judge has the discretionary power to discharge that accused.

(4) While exercising the jurisdiction under the section 227 of the Criminal Procedure Code, 1973, the judge may not make any roving enquiries about  pros and cons of that case and have to weigh the evidence and the document which was produced by the Court like he was conducting a trial.

In Tulsi Ram & ors. vs. State of Uttar Pradesh, the court held that the charge was not raised at any earlier stage of the trail and refused to accept any of the grievance related to error in the charge framing.

Charges in various types of cases and its provision:

A charge is usually  framed in three types of cases only:

3) Section 246 (1) of Criminal Procedure Code (WARRANT CASES) Trial by Magistrate which is instituted otherwise than on report of police report or instituted based on private complaint. Generally charge is not framed in the trials of Summary Trails and Summons Case but charge plea is held.

The magistrate will frame a charge under the section 240, after considering the report by police and the all the documents which has been sent with it under the Section 173 and after examining  and hearing the both parties, if the magistrate has the opinion that accused has really committed the offence, Magistrate can explain the situation to accused and ask him whether accused pleads guilty or claims/wished to be tired.

The Criminal Procedure Code seeks to secure the requirement of accurate statement of the accusation through the following sections.

Section 224 of Criminal Procedure Code, 1973 states that whenever an accused is charged with two or more offences and he got conviction in one or more of the offences, the Complainant or the prosecution may then withdraw the rest of the charges with due permission of the Court. If Complainant or Prosecution withdraw the remaining charges which was instigated on accused that amount acquittal on those charges and those charge cannot be inquired again except if  Court ordered for to set aside the conviction which was given earlier.

Discharge of the accused:

Section 227 deals with the discharge of an accused. The Judge has the discretionary power to discharge the accused that discharge should be done by reasonable reasons for doing such act. The purpose of this provision is to eliminate the possibility of harassment of the accused in  the situations when there is no prima facie case against the accused. When the guilt or innocence of an accused are in same proposition at the initial stage of making an order, normally the order will have to be made under the Section 228 (framing of charge) and not under the  Section 227 (discharge)[11].

2.     More than two offences within one year in same kind

4.     Offences of misappropriation of property or criminal breach of trust connected with falsification of accounts:

7.     Alternative offence when it is doubtful

8.     When major offence is charged, accused may convict for minor offence

9.     When minor offence is charged, accused should not be convicted for major offence

Charge is the foundation of accusation and it must be framed properly; Evidence should be tampered with respect to matters, which is for in the charge & for the other matters. The court is required to pay more attention to documents which is referred to the Section 173.If the Magistrate has been convinced that there is a prime facie in the case, then there is no necessity to adduce any other reasons for framing charges. In addition, the magistrate should write an order for mentioning the reasons when he discharge the accused. The court has power to alter or to add anything charge at any time before the pronouncement of judgment. When a person has been charged that person may get either conviction or Acquittal.

[1] Ashish Agarwal, Meaning, Form and Content of Charge under the Cr.P.C, 1973
https://www.legalbites.in/meaning-form-and-content-of-charge-under-the-criminal-procedure-code-1973/, February 4 2020

[10] Judge Should consider all the case details, the documents which has been submitted and after hearing the accused and the prosecution.

[12] Not Exceeding three offences in a year