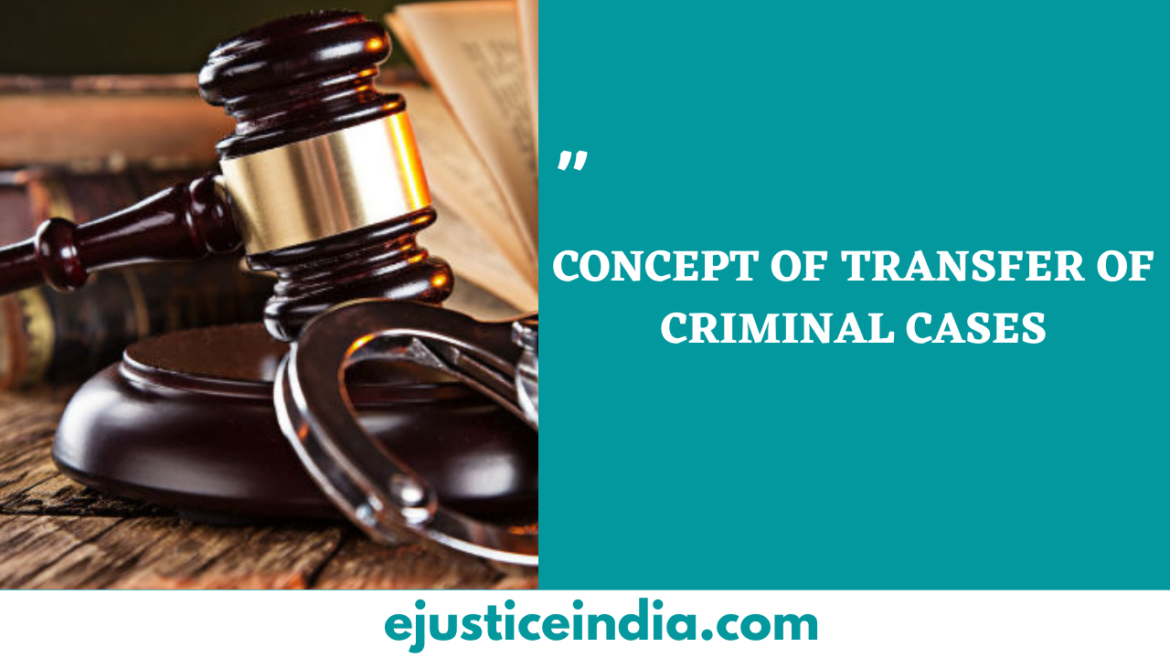 Indian Penal Code, 1860 and Code of Criminal Procedure, 1973 mainly deals with criminal cases in India. Transfer of criminal cases are discussed in the CrPC from section 406 to 412. There are many cases pending in the courts which delays the delivery of justice to people. So, to maintain the belief of people in judiciary system and fasten the judicial process certain provisions are laid down to transfer the criminal cases from one court to another. As per the CrPC, the right of appeal is only available in the High Court. But only in exceptional cases, the right of appeal is available in the Supreme Court.

POWER OF SUPREME COURT TO TRANSFER CASES AND APPEALS

1. There is an unfair trail by the court on his case.

2. He can’t be able to find any proper justice delivered to him.

3. He is the Attorney General or Advocate General of India.

Supreme Court also has the power to transfer any cases from any subordinate courts in case of pending of any matter. Supreme Court also takes necessary measures to maintain fairness and principle of natural justice while transferring the case which is also ensued by the court where the case was pending.

In Sukhdev Singh Sodhi v. The Cheif Justice and Judges of The PEPSU High Court[1], the court held that the power of Supreme Court to transfer any case does not extend to transfer any cases of contempt proceeding which is pending before the high court.

In Kaushalya Devi v. Mool Raj and Ors[2], the Supreme Court held that in cases where the Magistrate opposes the transfer of case application by filling an affidavit, then the transfer of the case won’t be happen as the Judge personally involved himself to give a fair and impartial judgement.

TRANSFER OF CASES AND APPEALS BY HIGH COURT

Section 407 of CrPC gives power to the High Court to transfer cases and appeals. There are some conditions to be satisfied, so that the High Court can transfer the cases.

1. Under article 21 of India Constitution, the people have right to a fair and impartial trail and when it appear before the High Court that those conditions cannot be had in any criminal court subordinate to it.

2. When there is a possibility of arising of difficult question of law which is generally unusual.

3. When by any of the provisions under the code, the transfer of the appeal or the case is made inevitable.

4. When it will tend to the general convenience of the parties or witnesses for the ends of justice.

1. If any offence which is inclusively under sections 177 to 185 of the Code that is to be inquired or tried by any court is not qualified but in other respects competent to inquire into or try such offence.

2. If there is a particular case or appeal is pending before any court, it can be transferred from a criminal court sub ordinate to its authority to another criminal court having equal or superior jurisdiction.

3. If any case is committed for hearing before the Session Court for hearing.

4. If a particular case or appeal is committed for hearing before the high court itself.

1. When a report for transfer the case or appeal is submitted by the lower court to the High Court.

2. An application for transferring the case or appeal is laid down by the interested party before the High Court.

3. The High Court, itself can initiate the transfer of case or appeal, if he feels that it would be best for the parties.

However, there should be no application of transfer of case or appeal from one criminal court to another in the same session division laid down before the High Court, unless an application for such transfer has been made to the Sessions Judge and rejected by him.

The procedure to make an application for transferring a case or an appeal by a person is laid down under subsection 3 to 5 of Section 407 of CrPC.

1. The application for transferring a case or an appeal to the High Court shall be made by motion which is supported by an affidavit by the applicant, which is mentioned under subsection 3 of Section 407. If the applicant is the Advocate General of the State, then there is no need of application.

2. According to subsection 4 of Section 407, when an accused made an application requesting to transfer the case or appeal, the High Court has the power to lead him to execute a bond with or without sureties, for the payment of any compensation which the High Court may award under subsection 7.

3. According to subsection 5 of Section 407, a notice of the application which is written, will be given to the public prosecutor by the accused person with a copy justifying the reasons for making such application and the courts shall not pass any order on the merits of the application unless at least 24 hours have passed between giving of such notice and hearing of the application.

According to Subsection 6 of Section 407, the High Court can put a stay order on the proceedings of a case in the subordinate court where there is an application of transfer of the case or appeal for the interest of justice. However, it won’t affect the subordinate court’s power of remand under Section 309 by such stay order.

Subsection 9 of Section 407 tells that, there will have no effect of Section 407 if there is an order which is passed by the Government of India under Section 197 of CrPC.

TRANSFER OF CASES AND APPEALS BY THE SESSIONS JUDGE

Sessions Judge also has the power to transfer the cases and appeals, which is mentioned under Section 408 of CrPC.

2. According to subsection 2 of Section 408, The Sessions judge may exercise his power to transfer the case on the report of the lower court, or the application which was submitted by the interested party, or on his own initiative for the interest of justice.

WITHDRAWAL OF CASES AND APPEALS BY SESSIONS JUDGES

Sessions judges also have the power to withdraw any case and appeal under Section 409 of CrPC.

2. Under subsection 2 of Section 409, the Sessions Judge have the power to recall any case or appeal from any Additional Sessions Judge at any time before the trail of the case or hearing of the appeal.

3. As per the subsection 3 of Section 409, if a Session Judge uses his power and withdraw a case or appeal mentioned under subsection (1) or subsection (2), he may either hear the appeal or try the case by himself or he may transfer the case for trail or appeal for hearing  to a other court in accordance with the provisions of this Code.

In Surendra Kumar v. Vijayan[3], the court held that the power of Session judge to transfer the cases and appeals from a criminal court to another criminal court which is mentioned under Section 408 (1) is an independent power and is not affected by any rule provided under subsection 2 of Section 409.

WITHDRAWAL OF CASES BY JUDICIAL MAGISTRATES

1. Under subsection 1 of Section 410 that any cases may be recalled or withdrawn by any Chief Judicial Magistrate which he has made over to any Magistrate sub-ordinate to him. He has the power to inquiry or to trail such cases by himself or he may refer the case for trail or inquire to another Magistrate who is competent to do the task.

2. Any Judicial Magistrate has the power to recall any case which was made over by him to any other Magistrate under subsection (2) of Section 192 of CrPC, and may inquire into or try such cases on his own.

MAKING OVER OR WITHDRAWAL OF CASES BY EXECUTIVE MAGISTRATES

▪ Withdraw any proceedings for disposal which has been started before him, to any Magistrate subordinate to him.

▪ Withdraw or recall any case, which he has made over to any Magistrate subordinate to him, and dispose of such proceeding himself or refer the same for disposal to any other Magistrate who is competent.

REASONS TO BE RECORED

In Ali Hussain and Anr v. Emperor[5], the court held that when the High Court uses its authority of revision, it is not bound by Section 412. But it may examine the record to check whether a fair or impartial trail has been conducted or not and based upon the proper facts the decision has been declared or not.

Transfer of cases insures that the justice has been delivered to the parties. Supreme Court, High Court and the Sessions Court have the authority to transfer the cases s although their power may differ. It does not change the nature of the trail or the relief amount which is provided to the parties involved in the trail.