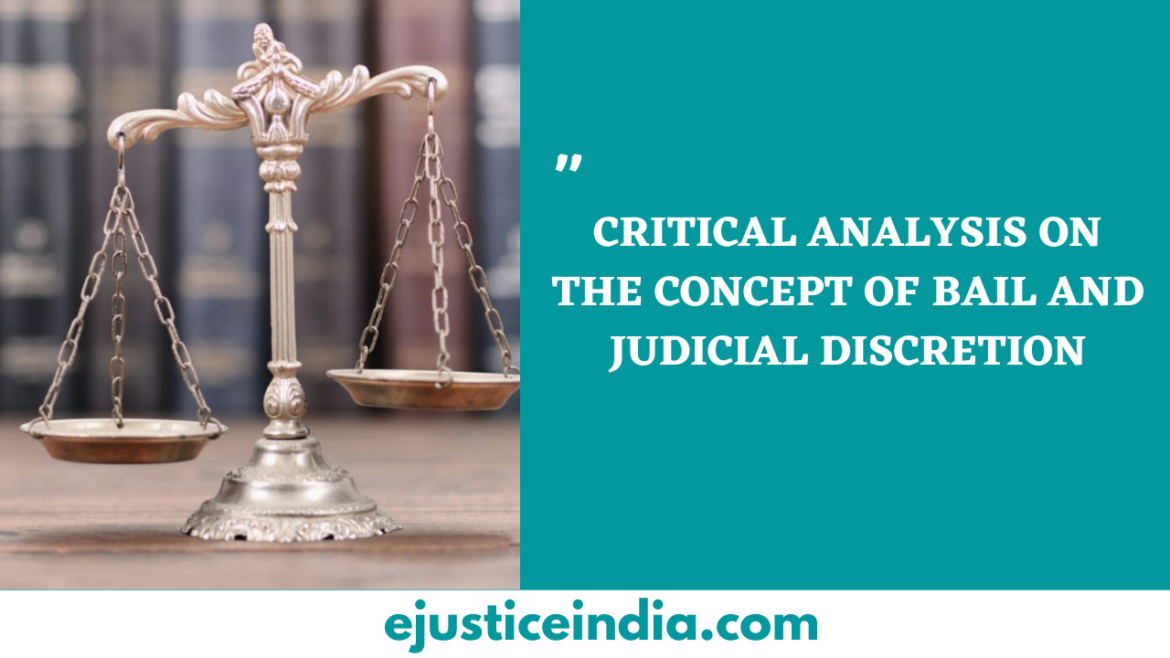 The Criminal Procedure Code, 1973 (CrPC) doesn’t define bail, although the terms bailable offence and non-bailable offence have been defined under Section 2(a) CrPC. In the former, bail can be claimed by the accused as a matter of his right, while in the latter, it’s on the discretion of the judge.

In Govind Prasad v. The State of West Bengal, the Supreme Court accurately held that the grant of bail is indeed a judicial act and not a legislative one. The discretion also, can’t be used arbitrarily.

In Harnairain Singh v. The State, the Supreme Court itself said that this discretion shall be judicially exercised, subject to limitations mentioned in Section 437 of the CrPC and keeping in view the heinousness of the crime, the nature of allegation, severity of punishment on conviction, possibility of accused absconding if released on bail, the danger of evidence being tampered with, health, age and sex of accused etc. The court can also impose ‘in the interests of justice’ such conditions if it considers necessary.

Bail means obtaining release from prison of a person whose trial is pending or an appeal, by deposition of security to ensure his appearance at the required time to legal authority. The monetary value of this security (bail bond) is decided by the court having jurisdiction over that prisoner.

Section 436-450 of the CrPC deal with the procedures regarding bail in India and includes the provisions for the grant of bail.

The Law Commission of India, in its 268th report named as “Amendments to Criminal Procedure Code, 1973 – Provisions Relating to Bail”, says the present system of bail is deeply influenced by economic status and discriminates against the poor and illiterate.

The Commission acknowledged, “Indian judiciary seems to have developed two approaches to bail, i.e., bail as a right for the financially able people; and for the rest, bail depends upon judicial discretion exercised through manipulation of the quantity of “reasonable” bail which will be required.”

In the case of Gudikanti Narasimhulu And Ors v. Public Prosecutor, High Court of Andhra Pradesh[1], it was highlighted that the grant of bail in India depends on the discretion of the bench hearing the plea, at large. Indian Penal Code isn’t discreet and doesn’t provide with a comprehensive set of situations for its grant and it has been left largely to the application of judicial minds.

In the case of Gokul Singh v. State of M.P.[2],it was held that the prosecution wasn’t responsible for the delay caused and hence the accused can’t be granted bail on the ground of such delay in trial.

In the case of Akhtari Bi v. State of M.P.[3], the bench highlighted the importance and need for a greater number of courts and other mechanisms to reduce backlog and pendency of cases. The Supreme Court in this case additionally observed that:

“Speedy trial, early hearing and quick disposal are essentials of criminal jurisprudence. In some countries like England, days are fixed statutorily for trial of cases. Keeping an accused in custody for a day more than necessary, isn’t permitted constitutionally and is violative of human dignity, freedom of life and liberty…Time heals the gravest scars and lessens the deepest injury suffered physically, mentally and emotionally. Therefore, if the Courts have been rendered helpless and the infuriating delay is threatening to eat away the system, then the Government may consider either to increase the strength to clear the backlog or create a mechanism by which criminal appeals pending for more than reasonable time in higher Courts should stand disposed of.”

In Gurcharan Singh v. State (Delhi Admin.), it had been observed by Goswami J., who spoke on behalf of the Court, that “there can’t be an unavoidable formula within the granting of bail. The facts and circumstances of each case will administer the exercise of judicial discretion in granting or cancelling bail.”

In American Jurisprudence[4] it is stated:

“Where the matter of granting bail lies within the discretion of the Court, the granting or denial is regulated, to a huge extent, by the facts and circumstances of every particular case. Since the objective of the detention or imprisonment of the accused is to secure his appearance and submission to the jurisdiction along with the judgment of the court, the chief inquiry is whether or not a recognizance or bond would effect that end.”

The judicial discretion in granting bail can’t be used in an arbitrary manner – sound discretion is guided by the law; it can’t be ambiguous and fanciful.

Lord Camden said – “Discretion of a judge is claimed to be the law of tyrants; it’s always unknown; it’s different for different people; it’s casual and depends upon constitution, temper and passion. In the best, it’s oftentimes caprice; in the worst, it is every vice, folly, and passion, to which human nature is liable”.[5]

An examination of the above-mentioned cases highlights the strong anti-poor bias of the Indian criminal justice system. Even though in some cases the Courts have tried to intervene and also have laid down certain guidelines to be followed, but unfortunately nothing has been done about it. There’s also a strong need felt for a complete review of the bail system keeping in mind the socio-economic condition of the majority of our population.

While the Indian criminal justice system works with such discretionary power in hand, even after trying their best and keeping in consideration the law and certain guidelines to be followed for its exercise, still remains flawed from a bigger perspective. The courts should always consider the socio-economic plight of the accused, have a compassionate approach and ensure background checks to prevent him from fleeing the justice system resulting in restoration of fundamental and other rights to the citizens.

Th Court can take under consideration the following facts concerning the accused before granting him bail:

The setting up separate jails, or at any rate isolating under trials from convicts could prevent hardened criminals from exercising their harmful influence over under trials. Such seclusion can also change the attitude of jail authorities and society at large towards undertrials.
The undertrials who are charged with petty crimes can further be put in reformative homes instead and asked to do community service till the time they’re released on bail.

The benefit of bail should not only be in the hands of a few, but should be available to the masses including those who don’t have the financial capacity to afford it.