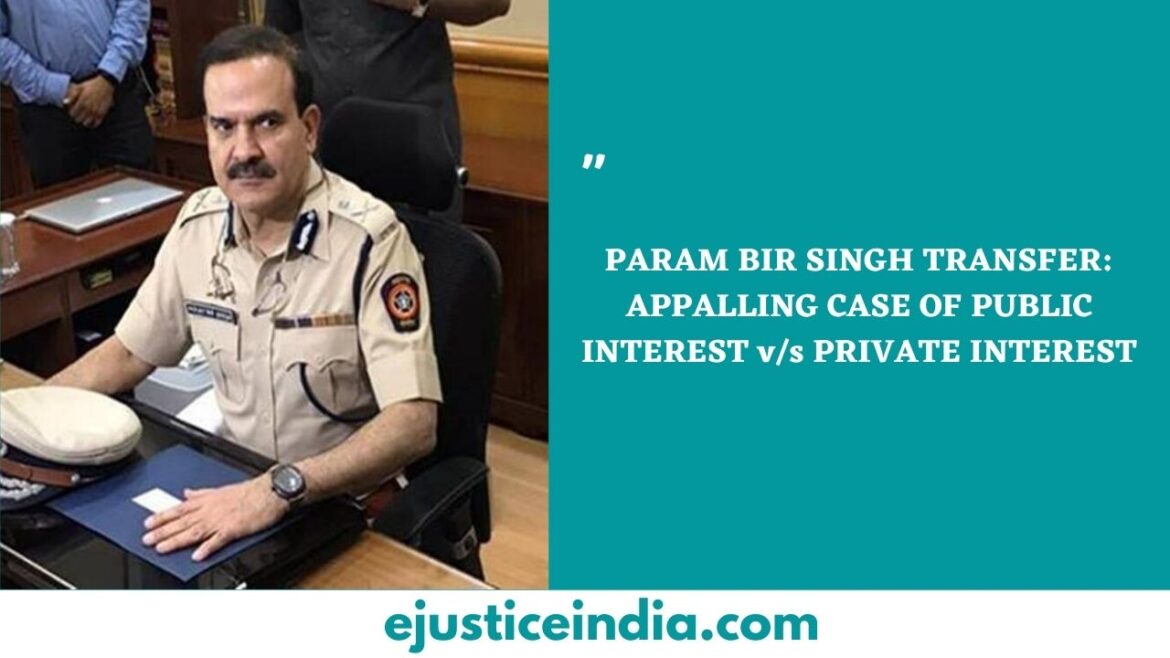 Former Mumbai Police chief Param Bir Singh is a 1988 batch Indian Police Service (IPS) officer who served as Police Commissioner of Mumbai, from 29 February 2020 until his removal on 18 March 2021.

On Monday he filed a petition before the Supreme Court about his transfer to the home guard department, saying it was done in an “arbitrary and illegal” manner “without the completion of the minimum fixed tenure of two years”. He moves Supreme Court seeking a Central Bureau of Investigation (CBI) probe into “various malpractices” of Maharashtra Home Minister Anil Deshmukh.

When the Supreme Court pointed out that the person against whom Singh’s plea was filed had not been made a party to the case, Singh’s lawyer, senior advocate Mukul Rohatgi, said the paperwork had been completed to make the Nationalist Congress Party leader a party to the case. “Anil Deshmukh has not been impleaded as a respondent. Petition should be before the Bombay HC under Article 226,” it said.

In a letter to Maharashtra Chief Minister Uddhav Thackeray, Param Bir Singh made these accusations. His letterhead was used to write the unsigned letter.

Param Bir Singh claims in his letter that Anil Deshmukh summoned Sachin Vaze to his official residence “several times” in recent months and “repeatedly told” him to “assist in the collection of money” for him.

Anil Deshmukh allegedly told Sachin Vaze that “there are about 1,750 bars, restaurants, and other establishments in Mumbai, and if a sum of Rs 2-3 lakh each was collected from each of them, a monthly collection of Rs 40-50 crores was possible,” according to Param Bir Singh.

Anil Deshmukh rubbishes allegations: Former Mumbai Police Commissioner Param Bir Singh has leveled serious charges against him, which Maharashtra Home Minister Anil Deshmukh has dismissed as “false” and an attempt by the top cop to save himself. In a tweet, Anil Deshmukh said, “Param Bir Singh has made these false accusations to save himself as well as to defend himself from further legal actions.” He said in another tweet that Sachin Vaze’s involvement in the Antilia bomb scare case and the Mansukh Hiren murder case is “becoming clear.”

What is this all about?

It all began on February 25, when an explosives-laden SUV was discovered parked near Mukesh Ambani’s Mumbai residence Antilia. Twenty unassembled gelatin sticks made up the explosives. Also, police discovered a threat letter addressed to the Ambanis. As the investigation into this case began, police discovered that the SUV in question belonged to Mansukh Hiren, a Thane-based businessman. When the cops inquired about the SUV, Mansukh Hiren stated that his vehicle had been stolen and that he had filed a police report.

On March 5, Mansukh Hiren was found dead, his wife has alleged that he was murdered by Mumbai Police Assistant Police Inspector Sachin Vaze. Sachin Vaze’s role in the alleged staging of the bomb scare outside Mukesh Ambani’s house has also come under scrutiny.

As the controversy escalated, the National Investigation Agency (NIA) took over the investigation and arrested Sachin Vaze on March 12. He was also suspended soon after.

Meanwhile, the BJP has demanded Anil Deshmukh’s resignation, claiming that he cannot be blamed for anything that has transpired.

Whether CBI can conduct the investigation?

Withdraw of general consent by the State of Maharashtra would not affect the jurisdiction of the constitutional court to direct CBI investigation. Sec. 6 of the Delhi Special Police Establishment Act deals with provisions relating to the Consent of the State Government to exercise powers and jurisdiction. It states:

Hon’ble SC in case of State of West Bengal and Ors. v. Sampat Lal and Ors [(22) 1985 ACC 206 (SC)] held that, “while Sec. 6 of the DSPE Act, 1916 would require the consent of the state government before jurisdiction under S. 5 of that Act is exercised by an officer of that establishment, when a direction is given by the court in an appropriate case, consent envisaged under Sec. 6 of the act would not be a condition precedent to compliance with the court’s direction. Sec. 6 of the act does not apply when the court gives a direction to the CBI to conduct an investigation.

To attain the goal of justice and for fair investigation Constitutional Courts can ordered CBI to investigate the case involving politicians and police officials. In the situation where political masters of state and police officials are themselves involved in alleged malpractice. In a scenario like Maharashtra, where there a top cop is alleging the involvement of a state home minister in a crime, there is a higher possibility of perfunctory investigation and to ensure fair investigation of the alleged crime, Constitutional Court can order CBI to investigate to offense.

Param Bir Singh was transferred from the post of the Police Commissioner of Mumbai to the Home Guard Department arbitrarily and illegally without the completion of the minimum fixed tenure of two years. The said transfer was maliciously effected purportedly under Section 22N (2) of the Maharashtra Police Act, 1951 with the reason that the transfer was necessitated by “administrative exigencies”. Petitioner has relied on T.S.R. Subramanian v. Union of India, where Court endorsed the view that civil servant should enjoy stability of tenure, without any arbitrary transfer and posting at the whims and fancies of political masters. Moreover, Hon’ble Court in T.P. Senkumar v. Union of India, [(2017) 6 SCC 801] wherein it was held that transfer of an officer from a sensitive tenure post requires serious consideration and good reasons that can be tested.  Further, Rule 7(3) of the Indian Police Service (Cadre) Rules, 1954 also mandates a cadre officer shall hold office for at least two years. But Article 311 of the Constitution of India does not alter and affect the doctrine of pleasure exercised by the President or the Governor or any person authorized on the behalf of the President or the Governor enshrined in Article 310 of the Constitution of India but only provides for limitations on it.

Reduction in rank means reduction or demotion in status or position not in duties or powers.  Sec 22N clause (2) the Maharashtra Police Act, 1951 empowers competent authority to make mid-tern transfer of any police personal.  It was held in B N Nagarajan and Ors. v State of Mysore (AIR 1966 SC 1942) that nothing prevented the state from exercising its executive power of making appointments and determining conditions of service by an executive order.

Article 311(2) is attracted only when a civil servant is “reduced in Rank”, “Dismissed” or “removed” against his will before the expiration of the period of his tenure. A civil servant cannot be dismissed or removed or reduced in rank unless he is allowed to make his defense. The principle of natural justice is firmly grounded in Art. 14 and 21 of the Constitution. With the introduction of the substantive and procedural due process in Art. 21, all that fairness which is included in the principle of natural justice can be read into Art. 21. But it will be difficult to lay down the general principles to decide whether the employee concerned is given reasonable opportunity. Proviso 2(b), Article 311(2) creates an exception where inquiry is not reasonably practicable. In Union of India v. Tulsiram Patel (AIR 1985 SC 1479), explaining the scope of the clause, the Supreme Court has said, “Whether it was practicable to hold the inquiry or not must be judged in the context of whether it was reasonably practicable to do so at the satisfaction of the competent authority. It is not a total or absolute impracticability that is required by clause (b). However, it is open to the court to test the validity of the order based on the fact and circumstances of the particular case. Mere allegation of malice in such transfer is not sufficient. The public interest and security of India are given more importance than the employee’s right of being heard. The principles of natural justice must conform, grow, and be tailored to serve the public interest and respond to the demands of developing and growing society. These cannot, therefore, be rigid and their application has to be flexible taking into consideration all aspects of the case.

In this whole scenario of Mumbai incidence, it can be inferred that there were loophole on the part of police officials but there are certain dark secret which nobody want to be revealed. Often in the political rivalry civil servant is the sufferer. Our constitution provides for equal protection of law and the principle of natural justice is embedded under our constitution, but the same is diluted owing to the act of some politicians whose motive is fulfillment of their vested interest.  But whenever there is a violation of fundamental rights, Supreme Court has zealously guarded the interest of the victim. Supreme Court has refused to entertain the plea filed by ex-Mumbai Police Commissioner Param Bir Singh and directed him to take the matter to the high court. The two-judge bench of Justice S K Kaul and R Subhash Reddy said that the matter raised by the petitioner was very serious, but it should be raised in front of the High Court and not the Supreme Court. If a high court is competent enough to grant relief, approaching Supreme Court would cause undue burden and docket explosion as the rate of disposal of cases are lower than the filling of cases. However, under certain circumstances, it may not be possible to hear the person before deciding his case. This is because natural justice should not produce unnatural results. Impracticability to hold the inquiry and inexpediency in the ‘interest of the security of the State’ are recognized as exceptions to the principle of natural justice. In no way private interest should be allowed to surpass public interest and internal security, but to determine a violation of any right of the petitioner the case requires scrutiny of court based on facts and circumstances.