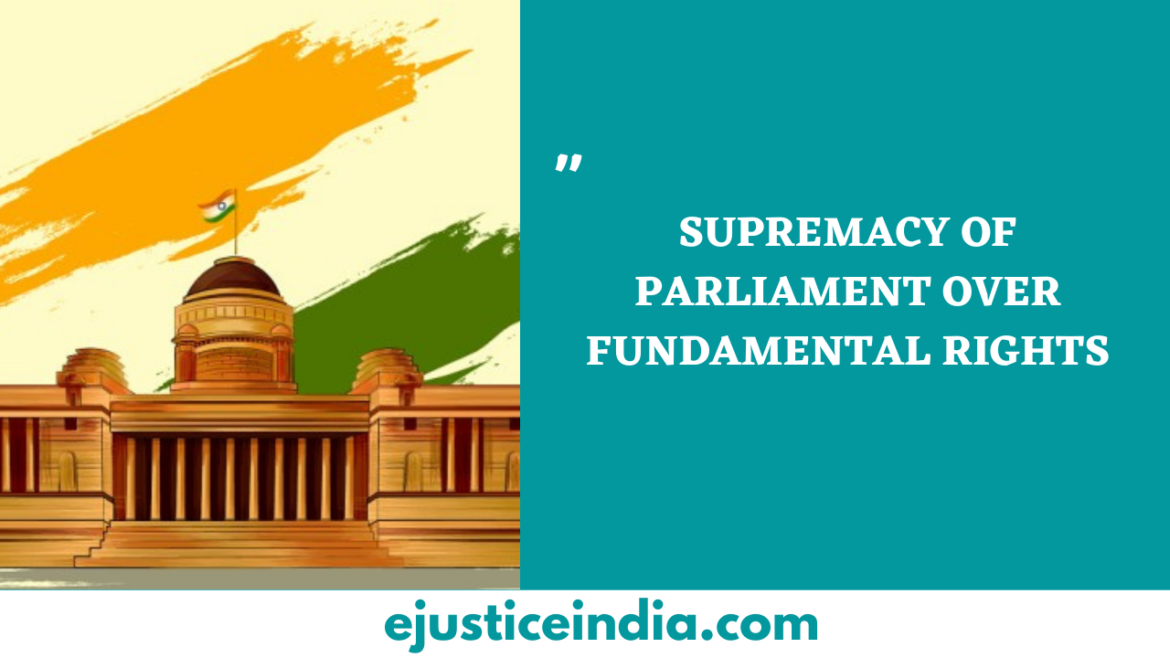 Fundamental Rights have been guaranteed under Part III of the Constitution of India. For a long time in India, there has been a debate about whether Parliament has the power to amend fundamental rights or whether this portion of the constitution is beyond the Parliament’s authority to amend. This question was settled by way of The Constitution (24th Amendment) Act, 1971.

The fundamental rights are given teeth in Article 13 of the Constitution. It makes these rights justiciable, meaning that they can be enforced in court. It declares all laws, whether pre-constitutional or post-constitutional, void, if they are inconsistent with or abridge or violate the fundamental rights. It has been held in Renu V. District & Session Judge, Tiz Hazari, that he main object of Article 13 is to secure the paramountcy of the Constitution especially with regard to Fundamental Rights.

Article 13 in fact provides for the judicial review of all laws, whether past or future. In S.S Bola V. B.D Sardana, it has been said to be the Charter for Judicial Review. If a statute is incompatible with the rights guaranteed by Part III of the Constitution, the courts may declare it unconstitutional. This judicial review power over legislative activity has been declared an inherent and fundamental function of the Constitution, being part of its basic structure.

AMENDMENT OF THE CONSTITUTION

PROCEDURE FOR AMENDMENT OF THE CONSTITUTION

The following are the two modes of amending the Constitution:

According to this method, the letter of the law does not change. But its meaning and its import changes. This includes amendment by

The validity of the Constitution (First Amendment) Act, 1951, curtailing the right to property guaranteed by Article 31 was challenged in Shankari Prasad v. Union of India, the first case on constitutional amendability.

The argument against the legitimacy of the First Amendment was that Article 13 prevents the enactment of a statute breaching or abrogating the Fundamental Rights, that the word “law” in Art. 13 covers any law, even a law amending the Constitution, and that the validity of such a law should be evaluated and scrutinized in light of the Fundamental Rights it could not infringe.

The Supreme Court affirmed the First Amendment’s validity by applying a literal reading of the Constitution. It does not include a constitution-amending law passed under Article 13 in its sphere of influence.

The Court insisted on a strong distinction between ‘ordinary law’, which is enacted through legislative authority, and’ constitutional law’, which is enacted through constituent authority. As a result, the Court decided the Article applies to a ‘legislative’ statute, i.e., a normal law passed by a legislature, rather than a ‘constituent’ law, i.e., a law passed to amend the Constitution. As a result, the Court held that Parliament could amend every Fundamental Right by following the “procedure” outlined in Art. 368.

The issue of the amendability of the Fundamental Rights remained dormant for the next 13 years following Shankari Prasad’s case. The validity of the Constitution (Seventeenth Amendment) Act, 1964, was challenged in Sajjan Singh v. Rajasthan. The right to property was once again harmed by this amendment.

A number of laws concerning property rights were transferred to the Ninth Schedule as a result of this provision, and were thereby exempted from judicial review. In the Shankari Prasad, a similar claim was made.

The claim was again dismissed by the Supreme Court, this time by a 3 to 2 vote. The majority ruled that the Amendment’s “pith and substance” was limited to amending the Constitutional Right in order to assist state legislators in carrying out the agrarian reform agenda.

The majority agreed with the Supreme Court’s conclusion in Shankari Prasad regarding the relationship between Articles 13 and 368. It had no reservations in holding that Parliament’s power to amend the Constitution under Article 368 could be exercised over any of the Constitution’s provisions.

The majority rejected the argument that Fundamental Rights are “eternal, inviolable, and beyond the scope of Article 368.” The Court again distinguished between a ‘ordinary’ law and a ‘constitutional’ law enacted in the exercise of “constituent authority,” holding that only the former, not the latter, was covered by Article 13.

As will be seen, the next instance, Golak Nath, was based on Hidayatullah, J.’s claim of fundamental rights’ non-amendability, while Kesavananda was based on Mudholkar, J.’s view of basic features.

The question of whether any of the Fundamental Rights could be abridged or stripped away by Parliament in exercising its power under Article 368 was posed again in Golak Nath v. State of Punjab, perhaps inspired by the above-mentioned remarks of the two Judges. The Constitution (Seventeenth Amendment) Act’s constitutional validity was questioned once more, this time with vigour and resolve. Eleven judges were involved in the decision, with a 6 to 5 split.

The majority now holds that the Fundamental Rights cannot be amended through the constitutional amending procedure outlined in Article 368, overturning the Court’s earlier decisions in Shankari Prasad and Sajjan Singh, although the minority supports the Court’s rationale in those two cases.

On April 7, 1967, Nath Pai, M.P., introduced a private member’s bill in the Lok Sabha to amend Article 368, making it clear that any constitutional clause may be changed by following the process outlined in Article 368.

The proposed bill was justified as an assertion of the “Supremacy of Parliament” which principle implied “the right and authority of Parliament to amend even the Fundamental Rights.” Nath Pai’s bill didn’t make considerable progression in Parliament. It was criticised as “an effront to the dignity of the Supreme Court” and as placing the Fundamental Rights at the “mercy of a transient majority in Parliament.” There was also an apprehension that the bill when ratified would itself be subject to a challenge in the courts and might be declared unconstitutional if the Supreme Court were to restate its Golak Nath judgment.

The following was the reasoning for the numerous provisions passed by the Twenty-fourth Amendment. According to the majority opinion in Golak Nath, the term “rule” in Article 13 included a constitutional amendment, and thus a Fundamental Right could not be curtailed or diluted. The following improvements in Arts. 13 and 368 were tried to reverse the effect of this pronouncement:

In Golak Nath, it was stated that there was no distinction between a regular law enacted through the legislative process and a constitutional amendment enacted through constituent power. To explain this argument, it was pointed out that the Presidential power to assent or not assent in both cases—an ordinary law and a law passed under Art. 368—was the same.

Along with the Twenty-fourth Amendment, the Constitution’s Twenty-fifth Amendment was adopted, with the following main features:

A state law may only seek immunity from legal challenge after the President’s assent. This clause has a lot of ramifications. Directive Principles were previously thought to be subordinate to Fundamental Rights. Directive Principles in Articles 39(b) and (c) were given precedence over Fundamental Rights in Articles 14, 19, and 31 in an attempt to reverse this relationship.

However, it wasn’t until 1973 that the issue of whether Parliament had unrestricted authority to reform Fundamental Rights resurfaced. The constitutional validity of both Amendments, namely XXIV and XXV, was challenged in the Supreme Court via an Art. 32 writ petition filed by Swami Kesavananda Bharati, a Kerala mutt leader, in Kesavananda Bharati v. State of Kerala. In this case, the petitioner argued that Parliament had no right to destroy or damage the constitution’s fundamental features or basic elements. It was also argued that Article 368 of the constitution, which granted Parliament the power to amend it, could not be overridden by the provisions of Art. 13.

Since Golak Nath, a decision by a bench of 11 judges, was undecided, the case was heard by a bench consisting of all 13 judges of the Court. For more than 60 days, the Court heard detailed arguments both for and against the Amendments’ validity. On April 24, 1973, the Judges delivered eleven opinions.

This case, thus, laid to rest the controversy. As a result, the word “rule” in Article 13 does not include a constitutional amendment made under Article 368.