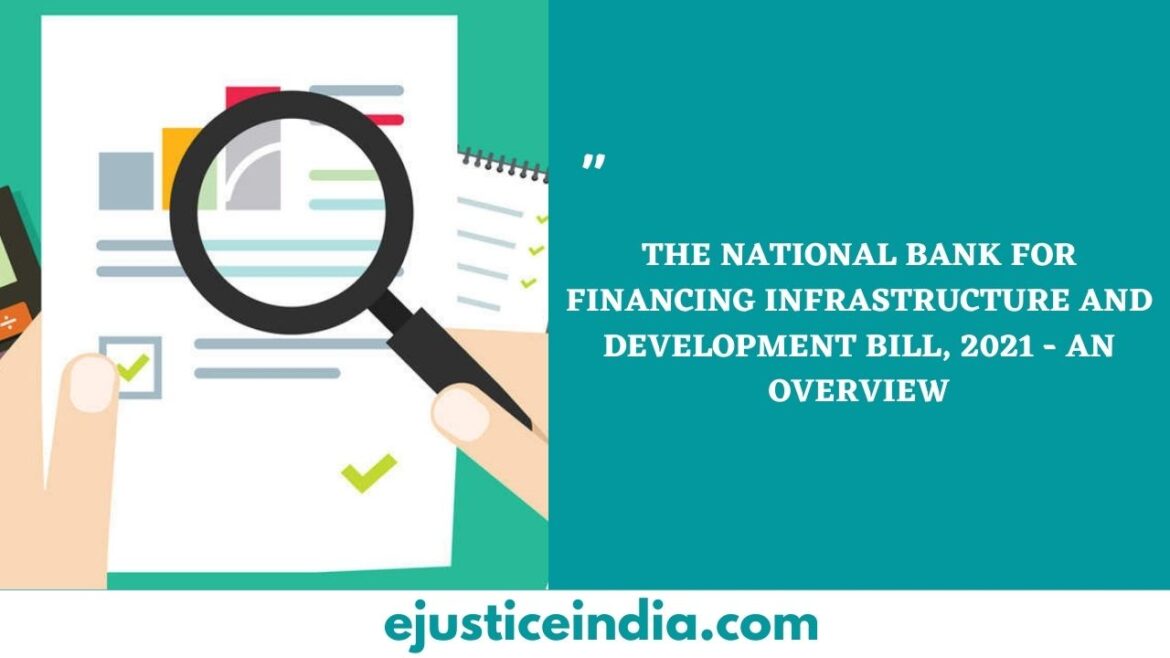 These are the institutions endorsed by the government, chiefly to offer long-term development or project finance to one or more sectors or sub sectors of the economy, involving higher risks, which may not be viable for commercial banks to finance. IFCI, ICICI, Universal Bank, NABARD, NHB are appropriate instances of Development Banks and Institutions in India.

MAIN OBJECTIVES OF THE BILL

The motive of this Bill is to:

Chapter I of the proposed bill contains the preliminary provisions and states that it would extend to the whole of India. A notification in the Official Gazette by the Central Government would lead to its enforcement on such date.

ESTABLISHMENT AND INCORPORATION OF INSTITUTION- NBFID

Chapter II provides for the establishment and incorporation for such an institute. In furtherance of the purpose of this Proposed Bill, a development financial institution (DFI) shall be formulated, which would be called the “National Bank for Financing Infrastructure and Development.” It would be a body corporate with its head office in Mumbai and it may open offices, branches and agencies at any place, within the territory of India or even outside it.

Authorized Share Capital- Initially, the government will own up to 100 percent of the institution’s shares which may be afterwards reduced up to 26 percent. Shares may be retained by:

AIMS OF THE INSTITUTION

The NBFID would execute the following purposes and objectives:

BOARD OF DIRECTORS AND MANAGEMENT OF NBFID

The Board of Directors of NBFID shall comprise of the following:

The overall superintendence, direction and management of the affairs and business shall vest in the Board which shall exercise all powers and do all acts and things which may be exercised or be done by the Institution.

ACTIVITIES OF INSTITUTION- FUNCTIONS AND POWERS OF NBFID

In accordance with the Chapter IV of the proposed Bill, the Institution formed under this legislation would execute the following main functions and powers:

The external agency appointed by the Central Government shall review the performance of the Institution for the last 5 years with respect to the purpose and objectives of such an Institution as laid down in Section -4. The reviewing authority shall submit a report of its findings to the Board which shall forward a copy thereof along with the action taken, if any, pursuant to such report to the Central Government within a period of 3 months from the date of receipt of the report.

GOVERNMENT GRANTS, GUARANTEES AND OTHER CONCESSIONS

According to Chapter V of the Bill, The Central Government may provide backing to the Institution through grants and contributions. The government shall prescribe a concessional rate of Government guarantee, not exceeding 0.1 percent. Hedging costs may be reimbursed in part or in full by the government.

Chapter VI incorporates the provisions regarding:

Chapter VII of the proposed Bill contains various miscellaneous provisions such as- receivables to be held in trust, setting up of other development financial institution or DFIs, power of Central Government to make rules, power of Board to make regulations, Rules and regulations to be laid before the Parliament, protection of action taken in good faith, Sanction for enquiry, inquiry, investigation and prosecution, appointment of Directors by Institution to prevail, validity of loan or advance should not be questioned, obligations as to fidelity and secrecy, adjudication, indemnity of Directors, application of Bankers’ Books of Evidence, 1891 to the Institution, application of Sections 34A and 36D of the Banking Regulation Act, 1949 to the Institution, liquidation of Institution, power of Central Government to issue directions, overriding effect of this Act, power to remove difficulties, amendment of the Reserve Bank of India, 1934 in the manner specified in the Second Schedule and amendment of the Banking Regulation Act, 1949 in the manner specified in the Third Schedule.

Chapter I, Section 2 of the Bill is the definition clause which explains the terms related to the Act. Some of the important terms are:

Last week, the Union Cabinet had permitted a capital infusion of approximately Rs. 20000 Crores for the establishment of a DFI. While introducing the Bill in the Lok Sabha, the Finance Minister also said that around seven thousand infrastructure ventures have been recognized at the central and state level. So far, the Bill has been passed in one House of the Parliament and is yet to be presented in the other House of the Parliament.