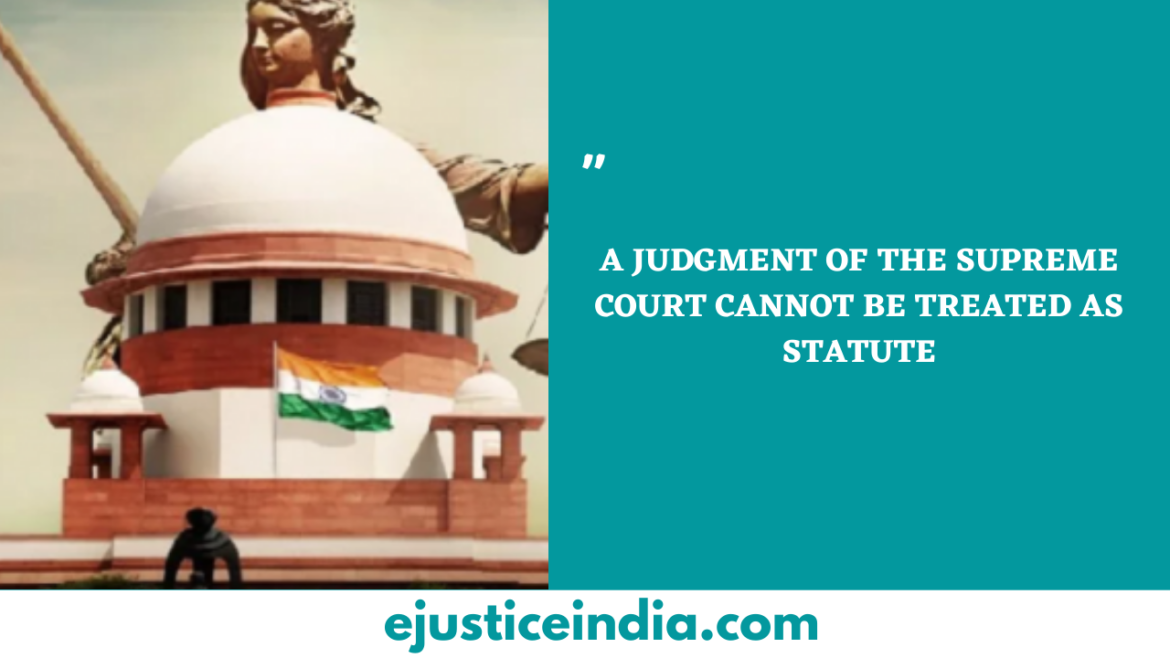 The Doctrine of Separation of Powers demands dissociation of judicial and legislative functions (Cassell & Co Ltd. V. Broome[i]). The main function of the Legislature is to enact laws and that of the Judicial organ is to adjudicate the rights and obligations of the citizens in accordance with the enacted laws.

The Supreme Court of India is the Apex Court and is the final interpreter of the Constitution and the laws. The Judges perform some creative function in the cases of first impression, in the matters of interpretation or in filling up any lacuna in the law made by legislation. The Judges, to some extent depend on their own sense of right and wrong and in doing so, they adapt the already existing law to the changed conditions. The decisions on such points become the authority or guide for the subsequent cases of a similar nature which is called a ‘judicial precedent’.

The judicial pronouncements of the Supreme Court are said to constitute the law of the land. This has been held in P. Purushottam Reddy V. M/s. Pratap Steels Ltd.[ii] The finality of Supreme Court’s judgment is based on the maxim, “Interest reipublicae ut sit finis lifium.” [Sushil Kumar V. State of Punjab][iii] and the binding force of the law declared by the Apex Court has been further deliberated under Article 141 of the Constitution of India.

In order to comprehensively understand the topic, it is pertinent to study the sources of law, the doctrine of precedent, law-making power of the Supreme Court, superiority between legislation and precedent and the separation of powers.

Among the various sources of law, the following are the major classifications as emphasized by Salmond:

c. Customary Law (Based on customs)

2. Formal Sources (That source from which a rule of law derives its force and validity)

THE DOCTRINE OF PRECEDENT IN INDIA

Generally, the word ‘precedent’ means some established pattern guiding the future conduct. In the judicial arena, it refers to the guidance or authority of past verdicts for future cases. A precedent is judicial decision containing a principle which forms an authoritative element termed as ratio decidendis. This rule is founded on public policy and if it is not followed by the Courts, there will be confusion in the administration of justice. Judicial precedent is based on the maxim “stare decisis et non quieta movere” which means “to stand by the decisions and not to disturb what is settled”.

The concept of precedents has been provided a constitutional status under Article 141 of the Indian Constitution. It has been held in Tribuvan Das V. Ratilal[iv], that precedents which enunciate the rules of law form the basis of administration in India.

Judicial precedents have a binding force and therefore it is an imperative source of law. In Union of India V. Raghubir Singh[v], the Apex Court of India emphasized on the importance of the binding nature of precedent in the development of law.

The Supreme Court in Hari Singh V. State of Haryana[vi], held that in the absence of strict binding rule of precedent, litigants would take every case to the highest court, in spite of ruling to the contrary in the hope that the decision might be overruled. In such a situation, the harmony of the judicial system would be destroyed and it will result in judicial anarchy.

Whether or not a particular decision i.e., precedent become binding depends on 2 main factors, namely-

Two theories have been propounded in reference to this question. There are two mutually conflicting views on this point. According to the first view, Judges only declare the existing law and according to the second view, they make law.[vii]

Whether Judges make or declare law depends on the nature of the particular legal system. In common law countries, the role of Judges has been significantly creative, whereas in countries where the law is codified, it has been comparatively less creative.

In accordance with the Article 141 of the Constitution of India, the expression “law declared by the Supreme Court” has a wider connotation than “law found”.  This means that the Apex Court does not merely interpret the law, it may also make or create law.[xii]

The following observations of Justice Homes were given with approval in Kesavanand Bharti V. State of Kerala- “I recognize without hesitation that Judges do, must legislate, but they can do so only interestlessly; they are confined from molar to molecular motions. This was referred to by Krishna Iyer J., with approval, in Gujarat Steel Tubes Limited V. It’s Mazdoor Sabha.[xiii]

In State of Punjab v. Renuka Singla[xiv], it has been held that the courts are meant to enforce the rule of law and not to pass the orders or directions which are contrary to what has been injected by law. It has also been held that no court has competence to issue a direction contrary to law nor the court can direct an authority to act in contravention of the statutory provisions.

In Rajeshwar Prasad Misra V. State of West Bengal[xv], the Supreme Court held that “no doubt the law declared by this court binds Courts in India but it should always be remembered that this Court does not enact.”

In Nand Kishore V. State of Punjab[xvi], it has been held that the rule of judiciary merely “to interpret and declare the law” has been said to be the concept of by-gone age. It is now fairly settled that the courts can so mould and lay down the law, formulating principles and guidelines, as to adapt and adjust to the changing conditions of the society, the ultimate object being to dispense justice.

It has been held in Pravasi Bhalai Sangathan V. Union of India[xvii], that if need be, to fill the vacuum, and till such time the legislature steps in, the Court may exercise the rulemaking power. It has, however, been held that it is only the Legislature and not the Courts which can create a law.

A three Judge Bench of the Supreme Court of India has been unanimously ruled in Vineet Narain V. Union of India[xviii], that there are ample powers conferred by Article 32 read with Article 142 to make orders which have the effect of law by virtue of Article 141.

In Sahara India Real State Corporation Ltd. V. Securities Exchange Board of India[xix], a Constitutional Bench of the Apex Court, while referring to the phrase “law declared by the Supreme Court” held that it means law made while interpreting the Statutes or the Constitution. Such judicial law-making is part of the judicial process. Further, under article 141, law-making through interpretation and expansion of the meanings of open textured expressions is a legitimate judicial function.

The Supreme Court cannot issue direction to the legislature, to enact a particular Act or amend an existing Act or Rules. It may make suggestions to the legislature to articulate a mechanism for attaining a specific purpose.

SUPERIORITY BETWEEN LEGISLATION AND PRECEDENT

Whether precedent is superior to legislation or legislation is superior to precedent is a controversial question. This depends on the definition one assigns to ‘law’ and also on whether the country puts the legislature in the centre of the legal system or the courts. Presently, both are equally significant and the one cannot attain its end without the other. The aim of law is the protection and progress of the society and the individual. For a planned progress, legislation is very essential. To interpret it and to apply and adapt it to a particular case, case law is equally necessary. Thus, they both contribute equally to the development of law.

The doctrine of separation of powers divides the mechanism of governance into 3 main branches- the Legislature, the Executive and the Judiciary. Although, the powers of these branches are well-defined in the Constitution of India, but still sometimes their functions overlap each other.

The main function of the Legislature is to enact the laws and that of the Judiciary is to ensure justice to the people in accordance with the laws enacted by the Legislature. The judiciary has the supremacy to strike down the unconstitutional laws, however it cannot enact any new law.

Can a Judgment of the Supreme Court be treated as statute?

The Judgment of the Supreme Court cannot be treated as statute. Though the judgment of the Apex Court is binding in nature, however, it is not to be treated as the legislation which is enacted by the Parliament of India. This is mainly due to the separate functions empowered by the Constitution of India to the Judiciary and Legislature.

The Apex Court has been accused of pronouncing judgments that are frequently labelled as Judicial Legislation. This happens when in the guise of articulating guidelines and principles, they assume the powers of the legislature.

For example, the Supreme Court has put limitations on the power of the Legislature to make and amend laws by laying down the basic structure doctrine. The Judiciary through the collegium system has also been accused of overstepping on powers of other branches.

In Shahbano’s case[xx], it was held that one forceful argument against judicial creativity and lawmaking by judges maybe that Judges are not representative of the people like the Legislators and therefore they have no democratic mandate to make laws or set aside the clear words of a statue. They should only indulge in law making when parliament is unwilling or unable to legislate or there is no law on a particular issue.

[viii] History of the Common Law.