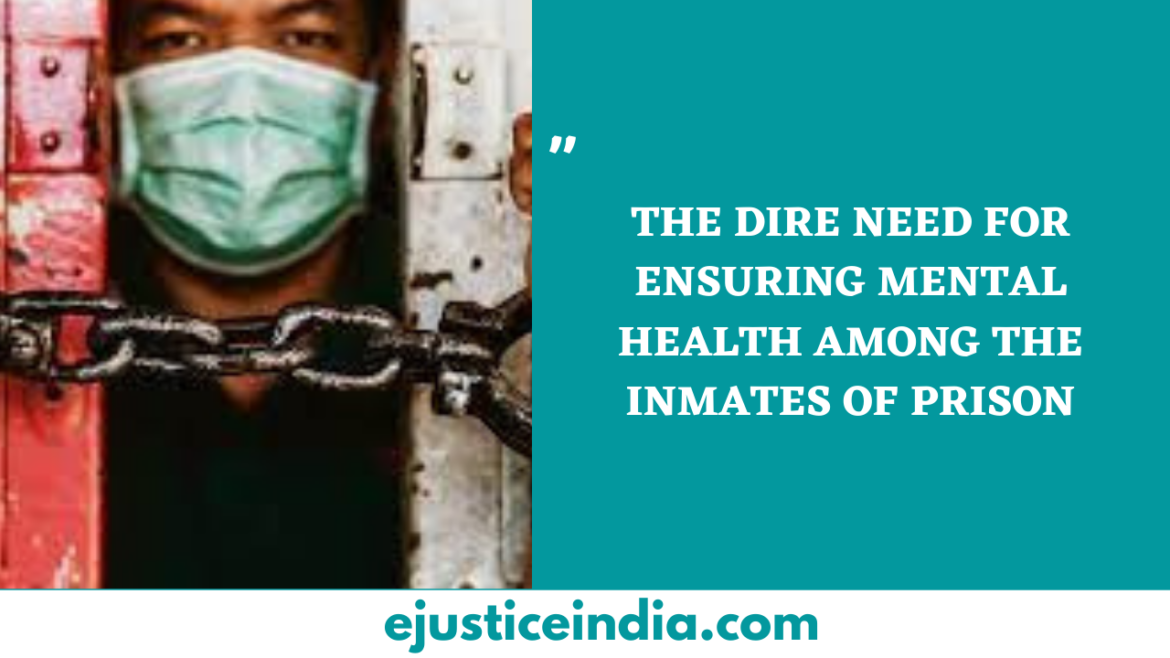 Mental health is basically the mental state of a person. It includes the intellectual and psychological development of a human being. According to Word Health Organization, mental health is not only the state where there is no a mental discomfort or illness but also it is an indispensable half. If there is no mental happiness there is no health. Access to good mental health is not easy and available at all. It highly depends on our approach and attitude towards everything. Our behavior as well as the thoughts plays a major role in the attainment of psychological welfare. Thus a person with a positive mind, those who having the ability to adjust with every situations in the life whether favorable or not is said to have a better mental health. In addition to this daily routine, our hereditary or innate nature also affects one’s psychological well-being.

The lack of awareness and attention to psychological welfare is a huge challenge amongst the crucial problems encountered by India in the present scenario. The major reason for mental illness and discomforts among the prisoners is due to the want of psychological happiness. It is estimated that about 90% of inmates in prison are suffering from these morbidities. The atmosphere as well as the strict rules set out in the prison is usually pernicious to the mental health of prisoners. It is the duty of the House Office to ensure health care facilities and The National Health Service didn’t have any responsibility in ensuring this service at one time. Thus the inmates of the prison had very poor resources with respect to health care. The National Health Service is anticipated to be in charge of the health care service very soon with another health organization. And the psychologists are required to take much efforts and initiatives to ensure and reinforce wellness programs and proper treatments to the inmates.

PSYCHOLOGICAL WELL-BEING OF PRISONERS AND THEIR CAUSES

While talking about mental health of persons, it is necessary to consider the challenges faced by the inmates of prison. They are the major class of people having mental disorders and illness due to the lack of mental health. There are so many reasons behind these morbidities. It is primarily due to the loneliness atmosphere inside the prison. Prisoners are denied of their right to freedom (Personal Liberty) guaranteed under Article 21 of the Constitution of India. Their right to freedom is restricted to a particular cell or area inside the jail premise. And this constitutes a major cause for the morbidities of prisoners. Sometimes these deprivations of liberty lead to suicidal tendencies as well.

One of an important enactment made with respect to this is ‘The Mental Health Care Act, 2017’ and it consists of various sections dealing with mental health care. Section 31 (2) of this act requires to impart compulsory training to the medical officials of the prison thereby ensuring basic mental health care to the prisoners. Furthermore, section 103 (6) of the Act, authorizes the government of all states to establish a health centre in the medical department of the prison of no less than a state.  Although the act highlights significant provisions with respect to psychological welfare many are of the opinion that they are inconsistent with basic realities due to the want of suitable groundwork and skilled personnel.  Indeed, based on the latest reports, the implementation of the act was in vain.

According to WHO mental health problems is mainly because of the denial of freedom, congestion, inhumanity, brutality, loneliness inside the jail, depression, regret on the commission of wrongful act, uncertainty and inadequacy in providing basic healthcare. If those mental health problems are not properly treated it can become a greater risk for failure of restorative treatment and future relapse upon release from prison. The inmate’s psychological health issues always outpaced the percentage of such illness among others. This emphasizes the need for ensuring mental health care to the prisoners, as the want of proper medical care posses some governmental interferences mostly at the time where there is finite financial resources. And these impediments in providing proper health care to the prisoners clearly indicates the enhanced rate of corrective measures, breach of laws and bodily attacks within the prisoners having such mental discomforts.

Prisoners with various mental disorders are mainly of 2 types those who have been charged with a crime and should be brought to justice, and others accommodated in the prison with regard to some conditions established by the Mental Health Act, 1978. Section 328 of CrPC, 1973 deals with the process for examining an insane accused.  By virtue of this section, the judicial officer investigating such an accused is of the opinion that he is lunatic and is unable to do anything themselves, the judge can order a medical practitioner to question the accused.

The mental health of inmates in the prison is really horrific and distressing. Based on the data’s and information’s collected from the Jails across the country as well as by the Prisons Act of 1894, it is clear that psychological well-being of the prisoners has not been analyzed or considered at all and was also disregarded by the concerned authorities particularly the Jail Department. The High Court of Karnataka recently noted that the mental health of around 2023 prisoners in Bangalore Central Jail is upsetting and they are facing dreadful mental illness.  The guidelines to be followed while providing medical care to the inmates have been globally recognized. It was sanctioned for the first time in 1955 and by considering the challenges faced by prisoners all over the world, an updated edition was ratified in 2015 by UNA.

In connection with a letter sent by Rama Murthy[1], an inmate from Bengaluru Central Prison to CJ of HC of Bangalore addressing the complaints of other inmates (the Rama Murthy v Karnataka State case, 1997), the court directed the district judge for inspecting Bangalore Central Prison to investigate the statements leveled in the letter.  And then, thon account of the analysis of central prison, it was stated that the inmates were forced to be inside the jail irrespective of their mental health and their situation is really distressing.

When comes to the Mental Health of prisoners, we should consider the challenges faced by them on account of congestion, depression, loneliness inside the prison. And the suicidal trend among the inmates of jail can’t be neglected. In the case of Sheela Barse[2] which dealt with the unlawful restraint and confinement, the Supreme Court of India directed to forbid the detention of inmates having no criminal behavior or tendencies. Thereafter a senior lawyer was authorized by the court to ensure the compliance and implementation of such order. And it was found that the persons not suffering from psychological disorders under confinement are at a disturbing rate.

The inmates of prison are suffering from lot of issues. And the requirements of health care among the persons are entirely different. Sometimes aged prisoners and women may require proper care since they are vulnerable when compared to others. But it is a tragic truth that the prison sentence is limited to deprivation of one’s freedom along with the denial of mental health care services.

This is an analytical study which calls attention to the dire need of ensuring mental health care among the inmates of prison. Just like all other citizens, the prisoners are also entitled to get proper health care. And it is our responsibility to secure them with physical as well as mental treatments when required. For that our administrative system should take necessary steps and good initiatives in order to promote the mental health care within the prison. One among them is to permit the inmates to mingle with co-inmates of the prison as well as allowing them to freely talk with their family. Certainly, it will be a success and can reduce the psychological discomforts among the prisoners to an extent. It can decrease the prisoners who came back to jail even after their period of conviction. If they get better care and medical treatment it will definitely reduce the suicidal tendencies of the prisoners. And also if we could ensure them with all the welfare as well as reformative measures it will inspire them to live with peace and will discourage them not to commit any offence in the future again. In addition to this appointing humanitarian personnel, establishing complaint resolving cell, providing entertainment facilities, offering the prisoners with income earning jobs, introducing library facilities and making them familiar with technical education etc. will reduce the loneliness and depressed mind of prisoners thereby developing the psychological well-being of prisoners suffering from various mental disorders. To conclude this system should be changed at the earliest and the administrative authorities should awake from slumber and should implement all the health care laws in the proper way at the accurate time.